My intensely private husband Bob has made a bold move.

He has started blogging.

Please stop by BC-Composer for a look.

Posted by FlutePrayer at 10:42 PM No comments:
Email ThisBlogThis!Share to TwitterShare to FacebookShare to Pinterest

My brain's RAM is full.

Here's how I know:

Yesterday I said goodbye to Long Beach Opera's production of "The Cunning Little Vixen" and collected my paycheck.

I came home after the demanding final performance, carefully put the sheet with the payroll information in the file folder newly set aside for that purpose, and threw the envelope in the trash...

WITH THE CHECK STILL IN IT.

I realized that something was amiss when I arrived at the bank parking lot this afternoon and couldn't find said check.

Bob was able to locate the errant check just where I thought it might be; IN THE TRASH CAN.

Fortunately, I hadn't shredded the envelope.

I would have, but I was just too tired.

The check has been safely deposited IN THE BANK instead of in the trash can.

See, slothfulness is not always a bad thing. 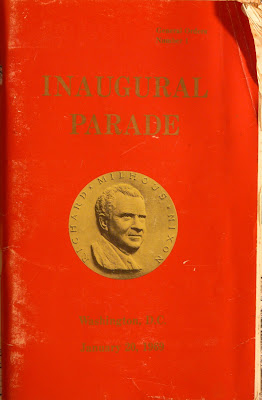 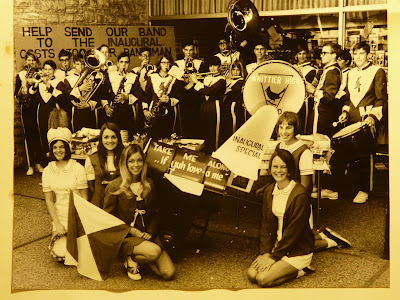 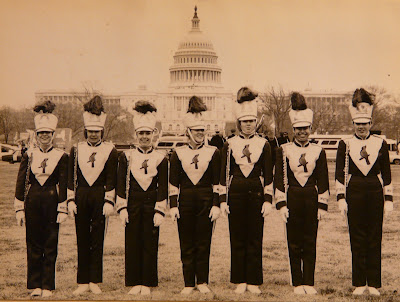 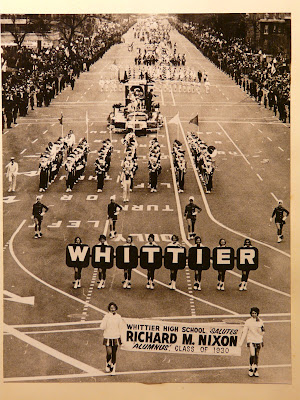 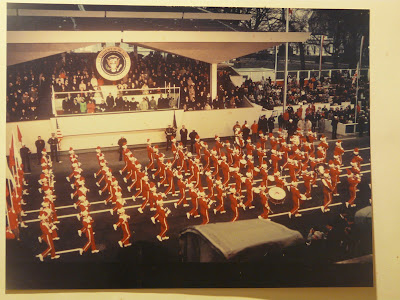 Posted by FlutePrayer at 11:10 PM No comments:
Email ThisBlogThis!Share to TwitterShare to FacebookShare to Pinterest
Labels: 1969, Inaugural Parade, January 20, Nixon 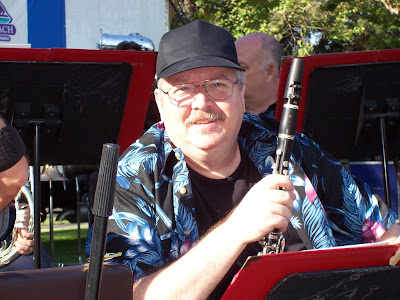 Check out friend and colleague Rusty Higgins (shown here in a lovely Muni Band shirt) as he rocks the house with this arrangement of Rhapsody in Blue aired in a 1980 episode of The Toni Tennile Show (HT Mike Vaccaro). Pay close attention to the opening clarinet cadenza for an extra surprise:

Rusty rocks!
Posted by FlutePrayer at 10:57 AM No comments:
Email ThisBlogThis!Share to TwitterShare to FacebookShare to Pinterest
Labels: Rusty Higgins

Miracle On The Hudson

I got the news during our final "Vixen" rehearsal: A plane had gone down on the Hudson River.

By the end of the rehearsal, reports were that everyone on board had actually survived.

According to reports, "Sully" was the last person off the plane, walking through the aircraft twice to make sure that every soul had been safely evacuated. 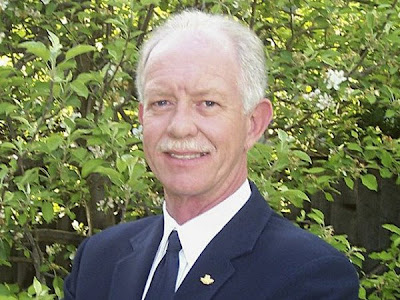 I have heard the word "miracle" used repeatedly to describe this event.

Posted by FlutePrayer at 5:29 PM No comments:
Email ThisBlogThis!Share to TwitterShare to FacebookShare to Pinterest

The orchestra moved into the "Vixen" venue at the Center Theater yesterday afternoon.

I arrived early enough to slither into my seat before the egress was blocked: 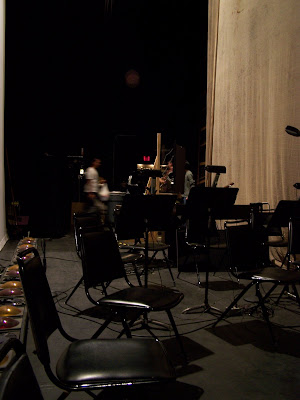 My colleagues settle into place: 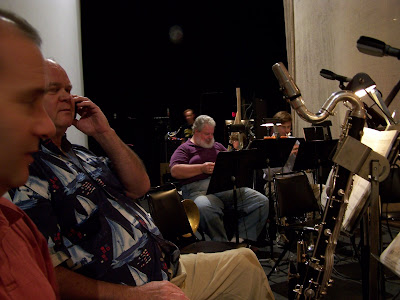 My close companions, these lights are so near my chair that I can't hang a sweater on the back of it without the threat of ignition: 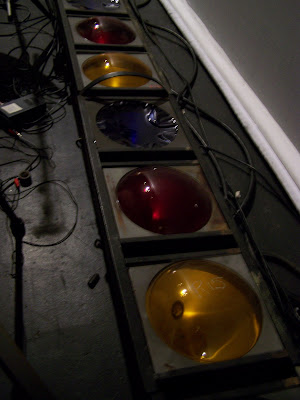 The violins are wedged in to my immediate right. Fortunately, the video camera that broadcasts the conductor to the monitors where the singers can see him absorbs the brunt of the piccolo playing, thus shielding a hapless string player from deafness and misery. 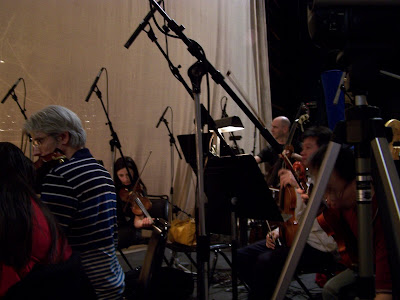 My view of Andreas is fairly unobstructed. The violist in front of me is extra tall, but is quite willing to adjust his position to keep out of my line of sight. 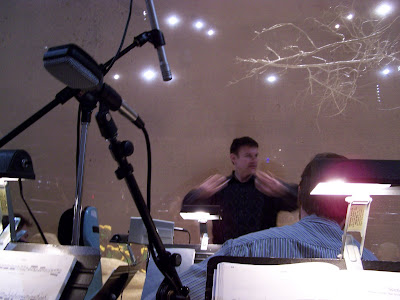 The carpool is coming in less than 2 hours for today's rehearsal.

I'm looking forward to what the "Vixen" brings.
Posted by FlutePrayer at 9:49 AM No comments:
Email ThisBlogThis!Share to TwitterShare to FacebookShare to Pinterest
Labels: Cunning Little Vixen, Long Beach Opera

I took the day off from all things opera on Saturday to get rested and ready for the challenge ahead. Bob and I spent some time together perusing the Travel Channel. We came across a different kind of challenge:

We were weirdly fascinated by this show, but couldn't shake the concern that the good natured host was shortening his life span by several decades.
Posted by FlutePrayer at 11:19 AM No comments:
Email ThisBlogThis!Share to TwitterShare to FacebookShare to Pinterest

No, I haven't abandoned the blog.

First I had to cram 3 acts of opera into my brain and under my fingers.

Then I had to begin to demonstrate that what I had crammed in had actually taken root.

I had my chances on Thursday and Friday when we joined back-lit conductor Andreas Mitisek for the first rehearsals of "The Cunning Little Vixen". 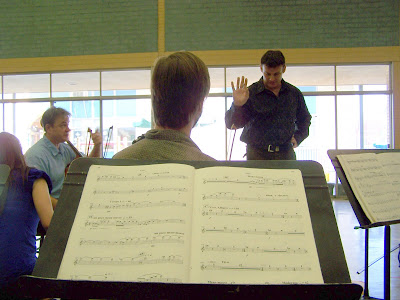 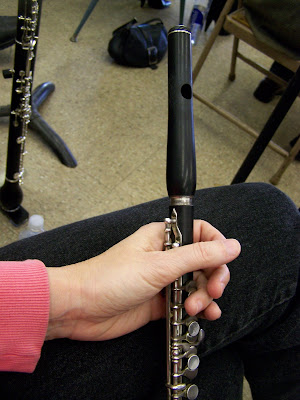 and my complete arsenal. 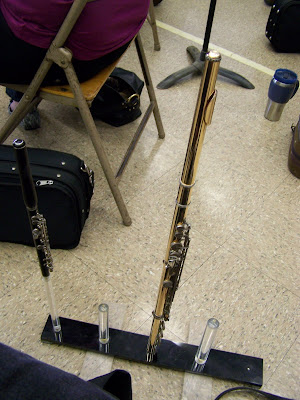 I happily joined my colleagues in our first stab at this exciting music (okay, Mike doesn't look so excited). 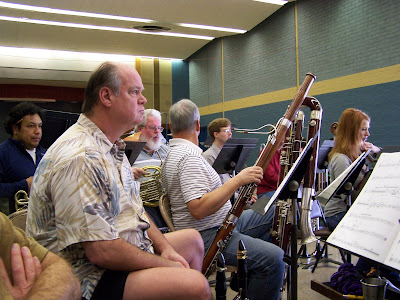 Here is the weaponry to my immediate left: 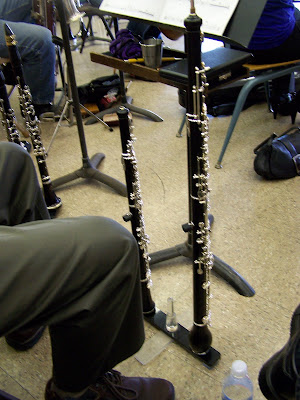 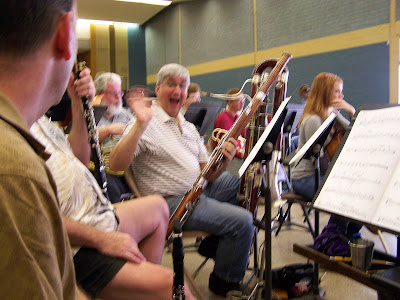 We transfer our small ensemble into an even smaller parcel of stage at the Center Theater on Tuesday.

Until then, you'll find me in the practice room...

The Vixen Is In My Head

You know what I mean; those catchy little tunes that seize your brain and won't let go.

According to WebMD, "Stuck song syndrome annoyed, frustrated, and irritated women significantly more than men. And earworm attacks were more frequent -- and lasted longer -- for musicians and music lovers. Slightly neurotic people also seemed to suffer more." (Who are you calling neurotic?!?)

As the first "Vixen" rehearsal approaches (I typed reproaches first!), I'm spending more and more time with the music, listening and playing it over and over and over...

I've come down with a serious case of Vixen earworm. The tune currently stuck in my head is this:

Posted by FlutePrayer at 6:01 PM No comments:
Email ThisBlogThis!Share to TwitterShare to FacebookShare to Pinterest

Yes, I've been light on the blog posts. That's because I've been heavy on the practice strategizing.

I had a simply marvelous week off before Christmas. I put my feet up and did NOTHING. Absolutely NOTHING. And I LIKED it!

I'm excited to get back in the practice habit because I've got something wonderful to practice for:

Those of you who know me well know that I adore working with Andreas Mitisek and Long Beach Opera. Bob and I stopped by the opera office right before Christmas to pick up my music. Andreas welcomed us like family, offered us delicious candy, and had me so excited about the upcoming production by the time we left that I almost thought I should pay him for the privilege of playing in it.

I've been slowly ramping my chops up, listening to the recording repeatedly, trying to get the rented music in shape (it's a marked up MESS - did a junior higher get ahold of it?), and preparing mentally for the time ahead (no, I can't play it perfectly now; yes, I will be able to manage it by January 17).

I am so grateful that lessons at APU don't begin until the week after the first performance. My students should be grateful as well. I'm a little scary when I'm in focused professional musician mode.

Our first rehearsal is next Thursday. Our first performance is 9 days later. That's not a lot of time to swallow a 3 act opera whole.