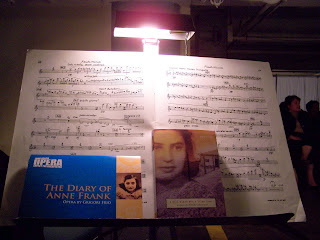 I am revisiting an old friend.

Long Beach Opera will present one peformance of "The Diary of Anne Frank" on Saturday, May 15, 2010 at the Barclay Theater in Irvine, CA.  Reviews of our 2007 performances were excellent:

"..an emotional tour de force. [Maljian's] singing was commanding and brilliant, fresh and strong from beginning to end...this production functioned on an authentically high level. Mitisek conducted with authority and his nine piece ensemble was exceptional." - The Los Angeles Times

I picked up the music at the opera office today. I am grateful to see that most of my original markings remain, even though the rental music has traveled around the world since last I saw it. It is a bittersweet reunion.

The music is challenging and powerful. Ani Maldjian (last seen as Madame Mao in LBO's Nixon In China) is stunning as the young Anne Frank. The most moving part of the whole production, however, is Holocaust survivor Laura Hillman.

Upon first meeting Laura, it is hard to grasp that this elegant, friendly woman survived 7 concentration camps. During the course of the opera, as she reads excerpts from her book I Will Plant You A Lilac Tree, one can only begin to grasp the depth of the sheer horror she endured as a Jew in the hands of the Nazis during World War II.

Ani and I had a chance to talk about the difficulty of this opera at the Nixon In China cast party last month. I remarked that I spent the entire first rehearsal with Laura dissolved in tears as I struggled to play my part. After that I had to completely shut out what was happening on stage and focus entirely on the job of playing the flute. Ani said she has to remove herself even as she sings or she'd never be able to perform the role.

Laura is the one who suffers. Unlike Ani and me, she is not a performer. This was her life. She often falls ill after the performances for weeks at a time under the sheer weight of the memories.

If you can, please join us as we revisit this old friend. Hearing directly from a survivor of the Holocaust, one of Oskar Schindler's Jews, will leave you forever changed.  As painful as it may be to be a part of this evening, you will not regret it.
Posted by FlutePrayer at 4:35 PM 2 comments:
Email ThisBlogThis!Share to TwitterShare to FacebookShare to Pinterest
Labels: Andreas Mitisek, Ani Maldjian, Diary of Anne Frank, Laura Hillman, Long Beach Opera, Oskar Schindler

The Patience Of Job

I love teaching the flute almost as much as I love playing the flute. The time spent with students can be so inspiring and very rewarding. I find myself thinking about my students while I'm performing, part of my mind analyzing how I can better prepare them for performance challenges and pressures.

I am grateful that, for the most part, the students in my care come to lessons with open minds, willing to try new things, and with the willingness to keep on trying until they can execute a new technique correctly and consistently.

Very rarely, I am presented with a student like this:

There is nothing more frustrating and exhausting than trying to impart to a belligerent, defiant pupil that challenges every word out of your mouth. It is difficult to keep frustration in check while searching for a chink in the armor of defensiveness. Sometimes a long term breakthrough occurs. Sometimes it doesn't.

I admire dance professional Tony Dovolani for his grace under pressure. He has the patience of Job.

I want to be like Tony when I grow up.
Posted by FlutePrayer at 10:26 AM 6 comments:
Email ThisBlogThis!Share to TwitterShare to FacebookShare to Pinterest

Bob and I recently discovered that we will have some interesting traveling companions on our anniversary cruise next month.

We will be sailing on a "Cougar Cruise".

"Carnival's De la Cruz didn't say why Carnival had banned future cougar cruises. The International Cougar Cruise's organizers have said the first voyage was a smash sell-out with a lengthy waiting list of people wanting to get on board."

Bob says we don't qualify anyway since he's an older man traveling with a younger woman, and that we'll have a great time no matter what. Amen to that!

And as the cruise boards say, the people watching ought to be interesting...

Posted by FlutePrayer at 9:04 PM 4 comments:
Email ThisBlogThis!Share to TwitterShare to FacebookShare to Pinterest

Bob and I were spending a pleasant Easter afternoon with my brother and parents at a friend's home in Long Beach when we were surprised by an earthquake.

I've experienced some gut-wrenchers in my time, so I know from experience IF YOU CAN'T HEAR IT, THE EPICENTER IS FAR, FAR AWAY.

We didn't hear a bit of rumbling, so we were astounded as the quake increased in intensity to the point of concern. We knew that people somewhere were having a VERY BAD experience because it wasn't very pleasant where we were.

When we learned that the epicenter was down in Baja California, we were flabbergasted. The shaking we felt was significant, yet the quake was well over 100 miles away. No bueno.

It took me several moments to grab my camera and start filming (we had to make sure we weren't going to die first). By the time I took the following video on my Droid, most of the shaking had died down.

For those of you who have never experienced an earthquake and think it would be cool, guess again. Speaking from experience, when your home suddenly begins to collapse around you, it is FAR from cool. And if you're at Disneyland during an earthquake (been there, done that), they close all the rides to make sure nothing is broken. It kind of takes the fun out of the day.
Posted by FlutePrayer at 10:52 PM No comments:
Email ThisBlogThis!Share to TwitterShare to FacebookShare to Pinterest
Labels: Baja Earthquake, Long Beach

Posted by FlutePrayer at 3:59 PM No comments:
Email ThisBlogThis!Share to TwitterShare to FacebookShare to Pinterest

For the Christian family, "Nixon In China" was a daunting, exhausting, intimidating, ultimately wildly successful undertaking. Frankly, there were moments in the process (okay, more than moments) that we were teetering on the brink of utter despair.

Knowing that we would be facing some trying times, we took action before the rehearsals even began.

We booked a cruise.

We took our first cruise together 2 years ago. It was a short 4 night trip out of the Port of Los Angeles, close to home. Bob was unsure if he could hang with it, but it ended up being, as Bob would put it, an enjoyable experience.

As we stood on the brink of "Nixon", we agreed that a cruise in our future would be an incentive to maintain sanity. Believe me, the cruise has already more than paid for itself in the moments of escape it offered during the darkest of "Nixon" hours. I would be sitting in the pit completely overwhelmed physically, mentally, and emotionally (but never spiritually), ready to cash it in. Instead, I would picture Bob and myself lounging on our balcony breathing sea air and eating bonbons and I would feel refreshed. It worked every time.

As we make our way through the next 44 (but who's counting) days, we will be savoring every moment, even as we anticipate our escape.

Meanwhile, here is a glimpse at what we have in store:

Posted by FlutePrayer at 10:52 AM 4 comments:
Email ThisBlogThis!Share to TwitterShare to FacebookShare to Pinterest

Room With A View

This is the view from the jury room. Santa Catalina Island is in the background "26 miles across the sea".
Two panels have been called (including the loud chatting ladies), but I remain listening to Chuck Missler on the i-pod, doing crosswords or Sudoku, or reading a variety of books (yay Sony Reader!)
We've just been given a 2 hour lunch break. It's a beautiful day here in Downtown Long Beach. Enjoying the new experience is on the agenda for the rest of the afternoon.
I'm making the most of it!

UPDATE:  In all, three panels were called.  I was not among them.  At around 3pm we were all excused.  I'm good for the next 12 months.

Posted via email from Teri's posterous
Posted by FlutePrayer at 11:52 AM No comments:
Email ThisBlogThis!Share to TwitterShare to FacebookShare to Pinterest

I'm sitting in the jury room of the Long Beach Superior Court near some extremely loud, chatty older women. I've learned WAY more about their personal lives than I'd ever hoped to know. Wow.

Meanwhile, I'm trying to find my happy place by remembering these beautiful roses Bob and I came across at Disneyland yesterday. Called "Brass Band", they caught the eye of many people hustling through New Orleans Square, so much so that several stopped to get a closer look. It has been some time since I've seen a rose that I wanted to run out and track down. This little floribunda seems to be calling my name. Meanwhile, those ladies sure can talk...

Posted by FlutePrayer at 9:46 AM No comments:
Email ThisBlogThis!Share to TwitterShare to FacebookShare to Pinterest
Newer Posts Older Posts Home
Subscribe to: Posts (Atom)