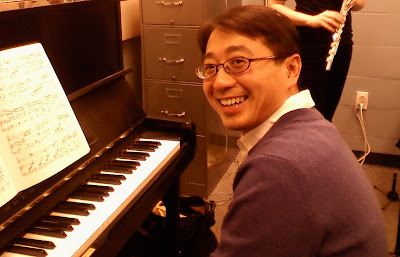 I am fortunate to have the privilege of working with gifted accompanist Sam. A native of Taiwan, he left a solid career and sold his home to come to the United States. I met him while he was working on his Masters at APU some years ago.

Sam has a deep love for this country, and began pursuing citizenship as soon as it was legally possible. Thus began years of red tape, huge legal fees, and heartbreak. Many were the hours spent in vain at the Federal Building in Westwood. He would obediently show up at an assigned time, stand in line for hours, then be told to go home with nothing to show for it. This happened time and again. Every path he was sent down led to a seeming dead end. It was agonizing to watch.

Just a few weeks ago I asked him how his quest for citizenship was going. He hung his head and said he was in his fourth year of waiting, that a background check was being performed again, and that all he could do was wait.

Yesterday a beaming Sam sought me out to deliver this news: He had received an invitation letter to attend Naturalization Ceremonies on March 20!!!!!! He is so grateful! One of the things he is looking forward to is the privilege of applying for a United States passport. That is a dream come true for him.
I rejoice with Sam. You couldn't ask for a more sterling example of a United States Citizen.

God Bless America!
Posted by FlutePrayer at 8:22 AM
Email ThisBlogThis!Share to TwitterShare to FacebookShare to Pinterest
Labels: Citizenship, Naturalization Ceremony