Muni Band Will Play On 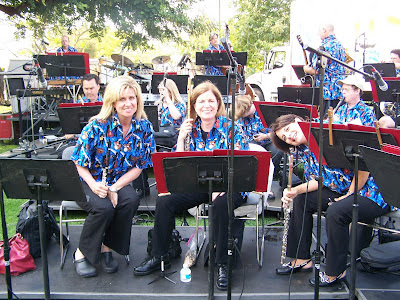 Did you know that it was in jeopardy?

Some of you remember when the 8 week, 5 concert a week schedule was trimmed to 8 weeks, 4 concerts a week.

Some of you remember the 2 years when the 8 week, 4 concert a week schedule was trimmed to 6 weeks, 4 concerts a week.

A few years ago those 2 weeks were restored.

According to this article in the Long Beach Press Telegram, the band will be back for year 100 despite a reduction in its funding:


LONG BEACH - The Long Beach Municipal Band should make it to 100.

"There is a proposed and small reduction consistent with a lot of the reductions in the rest of the city," said Phil Hester, director of the Department of Parks, Recreation and Marine.

"We're going to be starting on some of the celebrations for them," Hester said of the band's forthcoming centennial.

Along with "Snow Days" in city parks and the Police Athletic League, the band's coda is a perennial rumor around budget time. This year was no exception.

But supporters view the band as a cultural institution and have worked fervently over the years to preserve its funding, albeit in an abridged fashion. The band could also make up the shortfall with donations. The El Dorado Park Women's Association and other groups help raise money for the band.

In its prime, the band played large concerts at the vaunted Municipal Auditorium, which closed in 1975, and on the beach.

Now the band, led by conductor Larry Curtis, is best known for a summer series at Marine Stadium, the Aquarium of the Pacific and Bixby, El Dorado, Los Cerritos, Whaley and other parks.

crowds, who roll out blankets and picnic baskets well before showtime.
Fifth District Councilwoman Gerrie Schipske said she was told by the City Manager's Office as recently as three weeks ago that cuts of some kind were being considered for the band, but she did not know the percentage.

"We haven't seen the budget yet, so I don't want to be alarmist," Schipske said, "but that was put out there as one of the hypothetical-horrible, worst-case scenarios."

The budget, which was formulated by City Manager Pat West and Mayor Bob Foster, can be adjusted by the City Council, which has the final say.

There is likely to be some back-and-forth over the spending plan. The city must close a $16 million to $17 million budget gap.

Schipske said she would oppose any reductions to the "Muni Band."

"This is not the year to make reductions in the band," she said. "People are expecting a celebration."

No doubt supporters will be out at the next two performances, 6:30 tonight at Marine Stadium, and 6:30 p.m. Friday at El Dorado Park. For other upcoming performances, go to http://www.longbeach.gov/park/recreation/cultural_programs/lb_municipal_band.asp.

I am grateful to those who feel that the Long Beach Municipal Band is worth preserving.

I love my job!

Posted by FlutePrayer at 10:51 AM
Email ThisBlogThis!Share to TwitterShare to FacebookShare to Pinterest
Labels: Budget Cuts, Long Beach Municipal Band