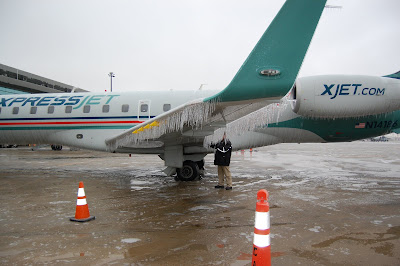 
I got the email from the Oklahoma City Airport last night just before midnight: Bob's mom Nellie's morning flight to Ontario was canceled due to the huge ice storm paralyzing the region. The cancellation wasn't really a surprise. Sunday evening's flight from Ontario to Oklahoma City had been canceled as well. It is difficult to load an aircraft in Oklahoma if it is sitting in California.

Nellie called at 3:45am to confirm the cancellation. Fortunately she is booked on tomorrow morning's flight.

So today will be spent in naps, naps, and more naps. Tomorrow Nellie arrives and the party can begin.
UPDATE: I just received this from Nellie:
"It is now 11:50 A.M. here on Monday - our power was out for 5 hours. It came back on about half an hour ago. Cheryl had phoned to have us come over there because they have a generator and we were going to do that but the large Bradford Pear tree at the bottom of our driveway (Bob will remember it) had split and fell across our driveway and we could not get out anyway. It was very cold in the house. We had all stayed under covers from 5:30 when the power went off until around 8:30. It is a frozen world out there. This is the worst we have had right here at our house and we may lose some more trees. A young man named Chad who works for the builders has a winch on his truck. He was at their office and came over and pulled the tree out of the way so we can go out if we need to."
Posted by FlutePrayer at 9:48 AM
Email ThisBlogThis!Share to TwitterShare to FacebookShare to Pinterest
Labels: Oklahoma City Ice Storm