Question: What's wrong with this picture? 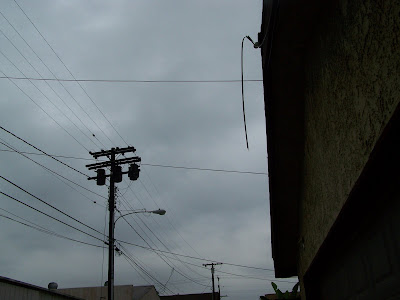 Answer: That's Bob's phone line. It should be connected to the telephone pole.

Yesterday afternoon a large semi was illegally parked in the alley behind our home. A "Waste Management" truck tried to squeeze around the obstruction.

The trash truck got past the semi, but ripped down the poorly strung phone line in the process.

Bob went and tied off the dangling wire, then promptly reported the problem to Verizon.

He was assured that the problem would be taken care of next Wednesday.

Hey, no problem. Bob has always wanted to be relieved of those pesky work calls. Oh, and the fax that he uses to send his reports so he can get paid? Who needs it!

I spoke to Jan at Verizon this morning. With a perfectly straight voice she assured me that the problem would be taken care of by next Wednesday.

I politely and calmly pointed out that a week seemed a long time to wait for a problem with their equipment to be resolved.

She briefly put me on hold, then told me the problem would be solved tomorrow.

That's what Bob was told yesterday.

I asked that the calls to that Bob's number be forwarded to his cell phone.

Jan agreed to do this.

So, since he will be able to get his calls, the line probably won't be repaired until next week.

I called Verizon (again) and spoke to a very nice woman named Ora. She was polite, patient and kind. It took her about a minute to fix the snafu.

The customer service people themselves are very polite. The service that is being offered to their customers is what seems to be lacking.

SATURDAY UPDATE: As of 12:15pm the wire was repaired by a very nice, very competent person named Ken. He said that in the future if we can get the license number of the trucks that cause the wire to go down, Verizon will track them down and charge them for the repairs. Meanwhile, the phone is up and running for which we are grateful.

Politeness of Customer Service Reps: A

Politeness and Competence of Service Technicians: A

Posted by FlutePrayer at 11:33 AM
Email ThisBlogThis!Share to TwitterShare to FacebookShare to Pinterest
Labels: Poor Customer Service, Verizon